Wiggle it, Just a Little Bit

In the O-Chi-Chak-Ko-Sipi First Nation, Skylin and Deshawn saw few households still producing organic fertilizers in the traditional way. Curious about what the effect of vermicomposting would have, they set out to learn more about soil, compost, and worms. Their project compared the effect of different worm juice dilutions and water on the growth of canola seeds, which were planted in vermicompost enriched soil. 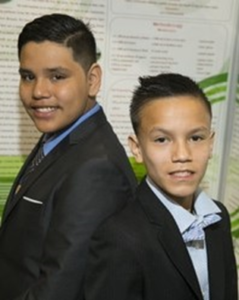 Participating in the Manitoba First Nations Science Fair, they won gold, and moved on to the Canada-Wide Science Fair 2017 in Regina. Flying in the wee hours of the morning, they participated in a week of STEM programming, met youth from across Canada, handed out pins, and shared their project with judges and the thousands of visitors that came though the fair.

At the end of the week, their hard work was recognized and rewarded, winning them the Junior First Nations University of Canada Award. And as Skylin and Deshawn said: “Don’t be afraid – just do it!”

Check out this incredible video that shares their story, their journey to the Canada-Wide Science Fair, and the importance of asking questions and finding answers:

To start a project you need to create an account on mySTEMspace. This gives you access to a project workspace, STEM fairs, information and resources.